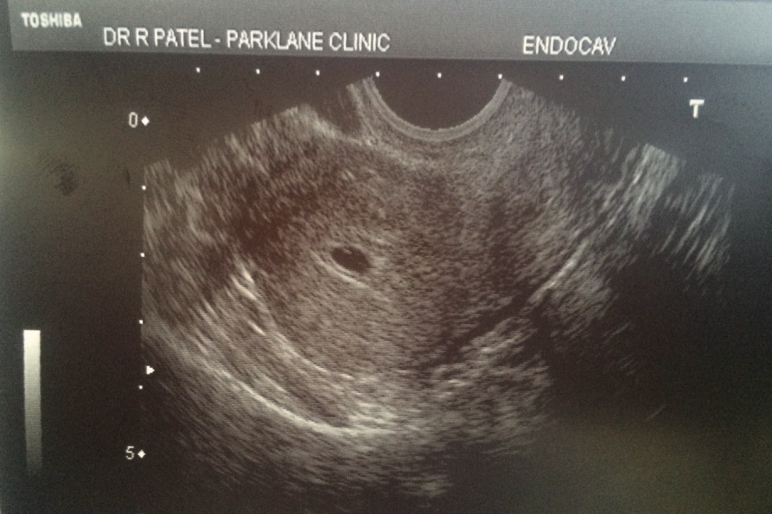 It was almost three weeks after the embryo implantation and just one week after the false negative the preceded the confirmed positive. We’d arrived at the doctor’s office for a scan to confirm everything was progressing as it should. According to the charts, etc. we were ±6 weeks pregnant – bearing in mind that you don’t start counting from conception, but rather from the date of your last period (don’t worry, I didn’t know that either).

Before we went into the scan room, we sat with our doctor in her consultation room as she explained what, in an ideal world, we should see. She explained that we could see any one of the first three stages of pregnancy on this scan – an egg sack, with a yolk sack, or either of the first two stages of a new foetus. She sketched the three stages to give us an indication of what to look out for and the three of us excitedly headed into the scan room.

It was a pretty nerve-wracking time, waiting for something – anything – to appear on that screen, to confirm the blood tests hadn’t raised our hopes for nothing. I gripped Becs’s hand tightly as we both stared expectantly at the screen. “There is it,” Dr Patel announced, pointing to a blob on the screen, “a good-looking egg and yolk sack, so about 5 weeks.” My heart almost exploded! There it was – our little Spot – right there for all to see!

We were over the moon, and officially pregnant! Immediately after the appointment we posted the pics Becs had taken of the scans to our family Whatsapp groups and shared the joyous confirmation. Our little Spot was scheduled to arrive around Christmas time. The previous December, when we’d done our last official IUI attempt, Becs had joked that “maybe we’d get a baby for Christmas” because the results were due just before Christmas. As it turned out, she’d been right, we just hadn’t specified which Christmas.

One thought on “The first photoshoot”